Adventures in reading and writing

It's been a little while since I've updated this blog, so here's a quick update.

The first draft of Recreant has - for the time being - remained untouched. I've been in the process of tidying up Scenes of Mild Peril with my fantastic editor in order to hopefully release it later in the year.  Lance Fling is (as well as being the name of a highly effective combat move in the Final Fantasy Series of games) a wonderful editor who it's been a pleasure to work with.

That's about all done now, so is now in the hands of people far more skilled than myself :)

Another new story of mine - Our Elegant Decay - has also been accepted for the first issue of the impending Stitched Smile Magazine. 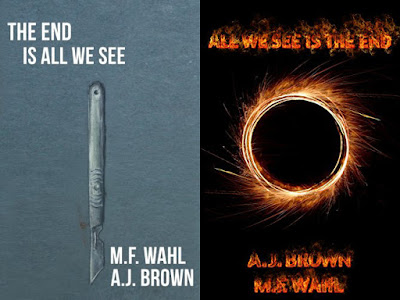 Two of my Stitched Smile stablemates have collaborated on this, a collection of two short stories - a joint novelette, if you will.  "All We See Is The End" (or "The End Is All We See", dependent on which variant you go for) is by M.F. Wahl and A.J. Brown.

I'll let my Amazon review do the talking...

Two darkly bleak tales, both based in otherworldly settings.

"Purple Haze" by MF Wahl is the story of the aftermath of a crash landing on an alien world, in which we learn that danger can lurk within the most mundane. Wahl does a wonderful job of building up the tension to almost unbearable levels, with a payoff that'll have you wincing as much as it'll leave you uneasy. Terrifying stuff.

"Run for the Flame" by A.J. Brown tells the tale of an endurance test to end all endurance tests, one that could determine the fate of a civilisation. Again, masterful use of tension with - if you'll excuse the pun - a wonderful pacing that will leave you exhilarated and exhausted. And that final paragraph - Wow.

Two top-notch tales from two writers at the very, very top of their game, and for a bargain price. Thoroughly recommended. 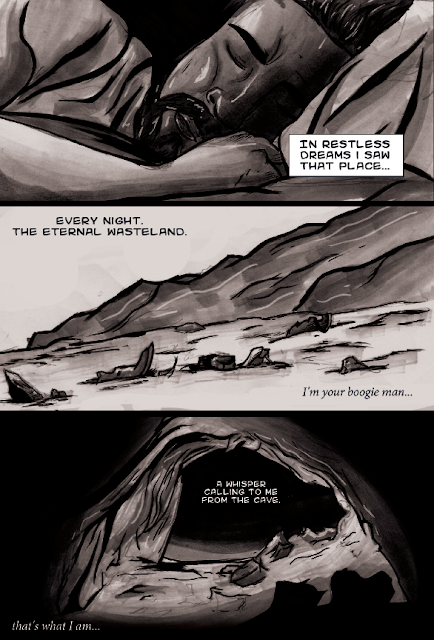 I first heard of Rees Finlay - a fellow Coventrian - when a friend of mine, George Bastow, contributed towards his excellent (but short lived) Indie Project. The Indie Project was an underground magazine celebrating independent media, lasted three issues, and back issues are available on Amazon and well worth checking out.

It was clear from his work on The Indie Project that he was very much a talent to look out for. He'd already at this stage written, drawn and contributed to a number of independent comics (Damnation, Wrestling, High Priestess to name but three) which were all collected into a single hardback volume which achieved some success on Indiegogo back in 2015.

His next project sounded intriguing - a semi-autobiographical tale called The Blue Flame. It promised to be a much more personal work than his previous projects, and I happily chipped in for the Kickstarter (which deservedly made all it needed in a very short period of time).

Despite fantasy elements (the character of the Blue Flame for one as well as a recurring character from his previous work), The Blue Flame is a painfully honest work. Without trying to sound patronising (that means "talk down to", by the way*) it's a well-crafted tale that exhibits a level of maturity that surprised me. Rees is no stranger to self deprecation - his social media accounts are testament to that - but that's just one of the (sometimes literal) demons that Rees confronts in The Blue Flame. Thoroughly recommended - he's crafted something truly special, and I predict big things for the lad.  It's not perfect - the quality of the artwork can sometimes fluctuate - but it's a truly impressive piece of independent comic work, and one that almost brought this jaded old cynic to tears. One of the best autobiographical graphic novels since Al Davison's The Spiral Cage.