If life is a performance, then let us bear silent and secret witness to the last act. The Duke lies dying, surrounded by those closest to him. The gentle percussive movements of his last breaths are accompanied by a chorus of gentle sobs and quietly murmured words. Final words are muttered in parting, sincere lamentations delivered.
His frail physical shell is failing, each breath shallower than the last. The weight of life bears down on him, as a body with no fight left to give nevertheless fights to remain a part of it. An instinct tells him that his struggle is over, and, in death as much as life, he remains one who never could resist an urge.
A long resounding chord sounds, shaking room, bed and occupant. The Duke is reminded of “Day in the life” by the Beatles, and smiles at the irony. He suddenly realises that he’s alone now, the silhouettes of those who surrounded him now fading into emptiness, but he isn’t afraid. It feels like a dream, but one he’s had numerous times before.
A beat begins to sound, chaotic at first, but quickly forming a regular rhythm, increasing in both volume and strength. It takes the Duke a few moments to realise that the sound is coming from him – from his own heart. Beating as new, renewed now.
He pushes himself out of the bed and onto his feet. He tentatively lifts himself up, preparing himself for a twinge of pain that never comes. He feels strong. Even for a man who’d shed his skin so many countless times, he feels more renewed than ever.
There’s a scent in the air, unfamiliar at first. It grows stronger and more acrid, not unpleasant but unexpected. Alcohol. Specifically, bourbon. He recognises it as he hears the sound – the leaden whoosh of the sudden displacement of air. Something has arrived. The Duke suddenly realises he’s not alone, and turns to face this unexpected visitor.
Before this moment, everything had an unexpected familiarity; The déjà-vu of dreams. But the individual who stood before the Duke now broke the spell – not at all who he expected. The craggy countenance of this visitant was familiar, yet unanticipated. Their eyes were hidden in the shade of a Civil war style Cavalry hat, only mutton chops and a moustached jaw visible.
“Aren’t you…?” the Duke asks, suddenly surprised by the strength and volume of his own voice – that tool of his trade previously reduced to a whisper for as long as he can remember. He’s interrupted before he can finish his sentence, a hearty chuckle from his new companion and a gnarled hand held out towards him.
“Too right,” comes the reply.  They shake hands like brothers, and everything starts to make sense to the Duke.
“I think I’d expected… somebody else,” he laughed. “But this makes perfect sense.”
“They thought I was doing them a favour,” replied his companion in a voice as coarse as gravel, “but I thought if I got here first, I’d get to you before anybody else.”
“Anybody else?”
“They’re all up here, man. They’ll all want you. But we need you.”
“We?”
“It’s a cosmic jam, man. Me and Hendrix – must have made my mark when I roadied for him.”
“You still perform?  Even now?  Even.. here?”
“Especially up here, man! That muse, that spark of talent? Where do you think it comes from, man? What we play filters on down – the sensitives, the passionate – they hear it, they write it and they play it.  Or they sing it.  Or they conduct it.  The whole of planet Earth is just our cosmic covers band, baby!”
“So everything I did was just…”
The visitor leaned in closer, close enough for the Duke to smell the tobacco and whisky on his breath.
“I’ll stop you there. Not everyone – for some of us, the spark was already there. Something unique, something magical.  Something that can’t be described in something as mundane as language. Something they couldn't create up here, even if they tried.”
The Duke stood in silence for a few moments. Slowly those thin lips began to curve, a smile finally returned to them.
“Sounds great. I’m ready then. Let’s dance.”
Two strong hands stretched out and patted the Duke on the shoulders, their owner laughing heartily to himself.
“Watch this. They only went and let me have these.”
Great wings unfurled from the visitor, not gossamer and feather as the Duke had expected, but thick black leather, already scarred, patched and worn. He took the Duke by the hand.
The two ascended. 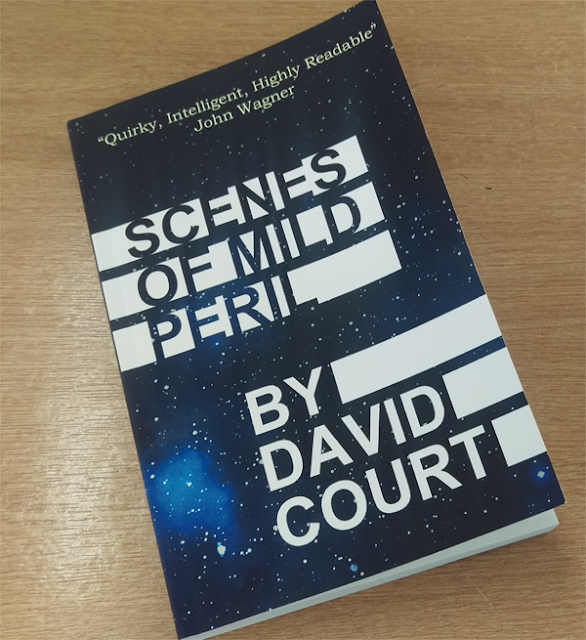 Posted by FoldsFive at 6:02 AM No comments: