I won’t be particularly sorry to see the back of 2019.

From a personal perspective, it hasn’t been a pleasant one. It has had its highlights – a lovely trip to Dublin in which I finally got to thank Michael Carroll of Judge Dredd fame in person for his lovely blurb for “Forever and Ever, Armageddon” and some lovely holidays (a stag do in Latvia that saw me firing AK-47’s in a terrifying underground bunker, and a considerably less weapon-based break in Budapest) – but my heart hasn’t been entirely in it.

My mental health has taken a bit of a blow again this year, with depression rearing its ugly head as well as a health scare with my blood pressure. I’m lucky enough to know the cause of both issues – my day job – but it’s felt at times like I’ve been about to snap. Work have been very understanding – even tolerating me handing in and rescinding handing in my notice - and my work has gotten considerably easier to cope with, but it’s been far from easy.

The formatting of my last book – Scenes of Mild Peril – finally got sorted out by the publisher, but it was all a case of too little, too late. Despite a lovely Scream review last year, there’s been very little take-up of it - although the few reviews it received have been lovely and very favourable. The rights revert to me very imminently, so I’m possibly planning a relaunch if there is enough interest.

On a more positive note, March saw the release of “The Theory”, TPub’s sci-fi take on their successful “Twisted Dark” brand. It features two of my stories – the opening tale “Obsession”, and a giant mech story “Battlesuit”. I got to promote this in person at MCM Birmingham and MCM London, attending a panel at each.

(Almost didn’t get into MCM London as they’d screwed up my speakers pass, but you’ll be glad to know that at no stage did I scream out “Do you know who I am?”)

There’s also been some good spin-off news from this, as Battlesuit is currently been filmed as an animated short by Hasraf Dulull, giving me my second IMDB credit(!). More news on this as I get it in the new year.

April saw the release of “A Town called Hell”; Burdizzo book’s ambitious shared universe horror anthology. I was a late invite to this, but contributed “And Heeeere’s your Host”, my story of a suicidal washed-out American Gameshow host. Burdizzo also released the first volume of their Burdizzo Bards books, and this included my poem “The Lantern”.

Also in April, Local Hero Press released the fifth volume of their “The Good Fight” superhero series, and this included my story “Blare the Bright Fanfares”. This is about a World War 2 Nazi supervillain who has a crisis of conscience, and features the return of the British super-hero “Sovereign” from my story “Sovereign’s Last Hurrah”

“Maps”, a story I wrote whilst holidaying in Croatia in 2018, featured in the first volume of “Burdizzo Mix Tape”. It’s inspired by the Yeah Yeah Yeah’s song of the same name, and personally I think it’s one of the best things I’ve ever written. It’s a bit of a diversion for me, being a tale of romance and loss set against the backdrop of a failed multidimensional experiment.

The middle of the year saw the release of my second collection "Forever and Ever, Armageddon" as an audio-book. Kristina Fitzgerald did an amazing job of making my stuff sound good, with her wonderful lilting Irish tones, and I'm incredibly proud of how well this works.

But, despite not writing much in 2019, I’ve turned my hand to a few articles which the esteemed Horror website Ginger Nuts of Horror have politely published. These have included a triptych of articles about horror in comics (concerning Swamp Thing, Zenith and Judge Death, respectively) as well as articles about Tales of the Unexpected, the new Creepshow reboot and horror-themed board games.  These seem to have gone down quite well, so I'll continue to write for GNoH for as long as Jim lets me.

I plan to be way more productive in 2020. My coming-of-age story set in Coventry in the eighties is currently out in the wild with a few publishers in the hope they'll bite, and I'm hoping to leap back into the industry all guns blazing. I'm not renewing my membership to the Horror Writers Association - it hasn't really been of any use to me, but I know that's a personal thing - but I'm not planning on giving up quite yet.

Here's to a wonderful 2020 for us all. Let the best of this year be the worst of the next, and I hope you'll continue to keep an interest in my writings. Thanks to those of you who've been there in some way for me this year - my fantastic wife, my partners in crime Lance Fling and MF Wahl, and my buddies at Burdizzo books - and a few select other people (you know who you are!).

Email ThisBlogThis!Share to TwitterShare to FacebookShare to Pinterest
Labels: audiobook, burdizzo, forever and ever armageddon, ginger nuts of horror, scenes of mild peril, The Theory, TPub 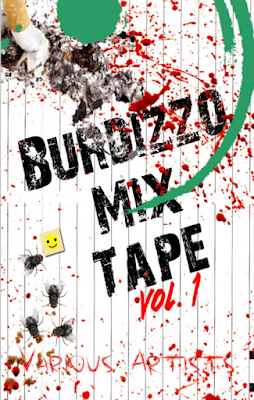 Fresh off the press is Burdizzo Book's new anthology collection, "Burdizzo Mix Tape Volume One". The brief for this was quite different - each author was given the choice of a song from a playlist, and the result is the Burdizzo Mix Tape. From The Stone Roses to Black Sabbath, Belle & Sebastian to Carole King, David Bowie to Tom Waits, it's an eclectic selection of both writers and themes, and is well worth checking out.

My own tale, "Maps", is inspired by the Yeah Yeah Yeah's song of the same name, and is a dimension-spanning tale of yearning and lost love.

Another bit of news is that, after a cavalcade of lengthy formatting issues, my last book "Scenes of Mild Peril" is now looking great. It's available in good old fashioned squirrel habitat format or Kindle, and can be found on both Amazon and a variety of other sites. Scream Magazine gave it four out of five skulls in a review that you can reads here.

I've written a triptych of Horror Comic articles for esteemed horror website Ginger Nuts of Horror; one on Swamp Thing, and ones about the 2000ad characters Zenith and Judge Death.

In other writing news, "The High Room", my coming-of-age tale set in Coventry in the eighties, is finished and trying to find a publisher, and my collection "Forever and Ever, Armageddon" is now available as an audiobook and as cheap as chips.

And I also did this, which may entertain those of you with kids and those bloody books... (click to embiggen)

Posted by DavidJCourt at 2:23 AM No comments:

Audiobooks! They're like you reading stuff out loud, but in a better voice. 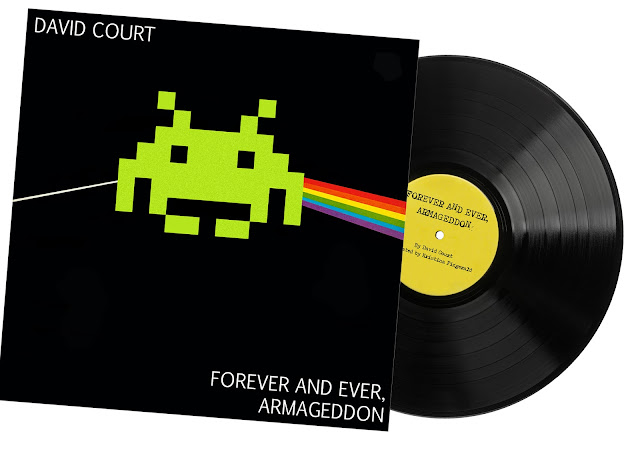 "Forever and Ever, Armageddon" - my collection of short stories from 2014 - is now available as an audiobook from Amazon. Narrated by the wonderful Kristina Fitzgerald, it's a collection of 24 varied short stories; horror, science fiction and satire.
From these stories, BattleSuit features in comic form in the graphic novel The Theory|, available from TPub. Blasphemous Tumours and Undercurrent can be found in the Stitched Smile books Unleashing the Voices Within and Hydrophobia, respectively.

Kristina has done a wonderful job of making my words sound awesome, and I can strongly recommend you give it a listen. If you're inclined to review it (and that would be awesome), drop me a line at davidjcourt at gmail.com and I'll pop you a promotional code.

To join Audible (or sign up for a 30 day free trial) and give this a listen, click here.  To order your copy from Amazon, click here. 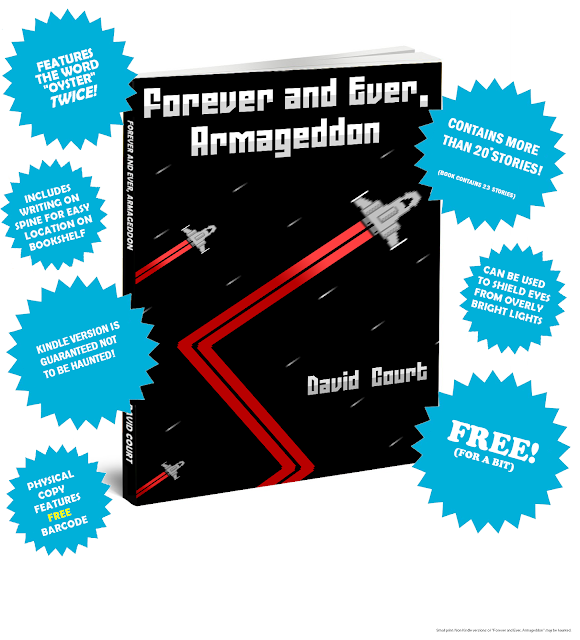 Posted by DavidJCourt at 2:26 AM No comments: