For the past week or so I've had to keep quiet over a very exciting project I've been involved with - namely an collaboration with Simon Myers with an original story of mine being illustrated for the first time and presented in a comic book format. Both pages of the story are below, and I'd recommend clicking on each of them to see them in their full beautiful glory and to make the text on each legible.

We'd tried in vain to adapt one of my existing stories but I have to be the first to admit that none of my tales are exactly action packed or dynamic enough to make a decent two page comic.  So in the end The Spying Game was conceived as an original new piece.

Remember the name Simon Myers - who regular readers of the FoldsFive blog will have heard of before. I strongly recommend you check out his work on his PrettyFunky website and get a commission from him before he becomes all famous and too big for his boots.

The script that he worked with -for those of you interested in this behind the scenes stuff - is reprinted in its entirety below.


THE SPYING GAME by David Court

All the captions are dialogues between two characters. You might want to use a different colour or font to make each persons caption distinctive. I'll end each caption with a "HIM" or "HER", so you know which is which.

PANEL 1: Whole page width panorama. Two people sitting on a park bench on a bright sunny day, Washington needle in the background – has to be obvious that it’s the USA.  Stick a flag or a hotdog or an extremely aggressive military policy in or something, I don't know. Gentleman's face is obscured by his newspaper, sitting next to a woman in a pretty dress – he's smartly dressed, she's casually dressed.  They're sitting far enough apart that they don't seem to be together. She's on the left, he's on the right.

CAPTION: In any other career you'd just be getting started by the time you hit 30. Not this one though. 30 is when you start to slow. It's when you spend more time sitting behind a desk than being considered for jobs like this. And not just any job… (HER) 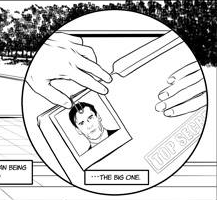 PANEL 2: A close up of a folder on the bench being held by the man. The womans hand is reaching for it. There's lots of redacted text on the cover of the folder and a photograph of a mans face who we won't see again until the last panels.

PANEL 3: A dim poorly lit room. It's the woman from the first panel from the back and she's undoing her dress.

CAPTION: You're aware that the stakes are higher this year? The enemy will stop at absolutely nothing in stopping you getting to your target. (HIM)

PANEL 4: The woman is elsewhere in the park and alone. There are two figures blocking her path, one with a baseball bat. She's dressed as in panel 1 – supposed to convey that it's happened directly after the meeting with the gentleman on the bench.  She's holding the folder.

CAPTION: Absolutely, sir. I'm honoured that you've picked me. (HER)

PANEL 5: The dim room from panel 3. The woman is now clad in tight black leather and is pulling on some gloves.

CAPTION: There were those who considered you.. unreliable. I've always been very fond of you. (HIM)

PANEL 6: A fist being slammed into one of the two figures faces. Teeth are flying from the man's crumpled face. The other figure is already unconscious, slumped against a tree.

CAPTION: Have I ever let you down, sir? (HER)

PANEL 7: We're now elsewhere, in the alps. The woman – now clad in the black leather we saw her getting into – is now skiing, being pursued by other skiers who are firing guns at her. 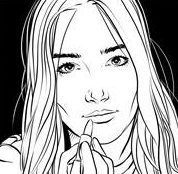 PANEL 8:  Dim room from panel 3 but we can now see her face as she is applying lipstick. She's as goddamn pretty as you want to make her.

CAPTION: Am I to start immediately? (HER)

CAPTION: Absolutely. All other missions are considered secondary. (HIM)

PANEL 10: An expensive sportscar racing through the streets being pursued by another sports car.  A circular insert on this same panel shows a button being pressed on the dashboard. If you want to indicate this is in a different country, put some foreign language on a roadsign or a flag somewhere.

CAPTION: I'd best get started then. (HER)

PANEL 11: Reverse spot of the sportscar with the female spy clearly visible driving it, a smirk on her face. There's a massive explosion behind her – her pursuer.

PANEL 12: We're underwater. She's swimming now, with a snorkel mask on and holding a harpoon gun. A shark is closing in on her.

PANEL 13: She's on top of one building looking down at another. It's night time, and feel free to stick some iconic London landmarks in there. Because, bloomin' heck, that's where we are now!

CAPTION: Good luck. The entire reputation of this department is resting on this one mission. (HIM)

PANEL 14: A handsome male spy in a smart suit – who you're at liberty to make look as much like James Bond as you can – I see Timothy Dalton, but you can use anybody except for David Niven or Woody Allen. (Thems the rules). He's crouched behind a wall with his gun ready as though he's stalking somebody.

PANEL 15: The female spy is above him, hanging off a wire in Tom Cruise Mission Impossible style. She's tapping the top of his head with a fingertip.

PANEL 16: The male agent is slumped resignedly against the wall, a despondent and sad expression on his face. She's either in the background running away or you can indicate that she's vanished back into the ceiling again.

CAPTION: I won't let you down, Sir.